About two months ago I ran across a doodling technique that I thought seemed just like the kind of art exercise that would suit me. Called "Zentangles" or "Zen Doodling", it is a meditative technique that will help you let go of your mind and overthinking a project and take you away for a few minutes or more. I became immediately addicted.
As I understand it, Zentangles is doodling with repetitive patterns, geometric shapes and lines. You start with a piece of paper. I use bristol board because it has some heft and if I happen to make something I like, it's not on scrap paper. I cut the paper to about a 3-inch square. Put a light pencil dot about 1/16 of an inch from the edge on each corner of the paper. With your pencil, draw lines connecting the dots so you have a frame. Inside the frame you will do your drawing. Imagine holding a piece of thread and letting it fall on the paper. Draw this imaginary line within the frame. This will be the last you use your pencil. Oh, and no erasing. Some of the fun of this technique is that you don't plan anything, just let it evolve.
Take a Micron 0.1 or 0.05 black pen and start doodling from the line you've made so that shapes and designs are created within the entire frame of the paper. 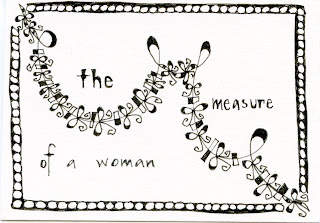 The above image shows the original loopy line and what I doodled. You can embellish as much or as little as you like. It's perfect for doing while the TV is on or if you have a bit of time and you don't have all your supplies handy since pen and paper is all you need.
Here's another doodle: 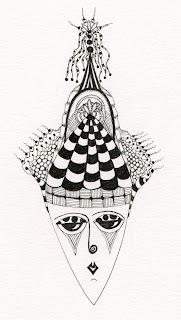 Hope you enjoy losing your mind with this fun and relaxing technique. Go to www.zentangle.com for more info.
Annie
Posted by Annie O at 5:19 PM 1 comment:

Cecelia McRoberts Does A Pastel Demonstration

Cecelia McRoberts does a demonstration of the different pastels available at our Jan. 2010 membership meeting held at Destiny Center in Rio Rancho. If you have trouble seeing all of the image in the video below, click on the image to get the full view.

Monthly meetings consist of a brief business meeting, followed by a speaker or demonstration. There is also a reception with opportunities for members to sign up for art venues, exhibitions, and volunteering. Art by members is usually available for viewing at the meeting.

For more information about our art association, visit our website.

Posted by Kristian at 1:22 AM No comments:

Ello, ello, ello. Well, New Year's Eve I was fortunate enough to be coming out of Los Alamos at just the right time. I hit the scenic overlook just before the Blue Moon crested the eastern horizon. got some killer pics of it. But later that night as I was going through Santa Fe, I stopped at the train station just to see what was up. I honestly didn't expect to see anything since it was a holiday, but to my surprise the Rail Runner and the Santa Fe Southern were both very active. I got a killer shot of the Santa Fe Southern, readying itself in the yard for an evening run. The picture I captured of the train also had the blue moon in the sky over it. It was terrific. Couple day later I showed the photo to the General Manager of the railroad and she LOVED it. She said she was going to "present" it to the Board of Directors. What becomes of it after that we will have to wait and see. But I was very proud of it.

Obviously, as most of you know, trains are one of my many photographic passions, so along with that I have been submitting several photos that have been accepted for display on the website, http://www.railpictures.net/. This is quite the accomplishment for me as their requirements and accpetance criteria are very stringent and for quite some time, was impossible for me to get anything submitted. I am up to 9 accepted submissions thus far and counting.

I also did a CD cover for a Christian Rock band a few months ago and it is finally being released this month, along with my credits listed inside for the photographic work.

That is what is going on in my world. Just thought I drop a line.

Hope all is going well for everyone and that your passion for life and the arts makes it into you pieces of work. good luck to all of you out there.
Posted by Kristian at 1:10 AM 2 comments: