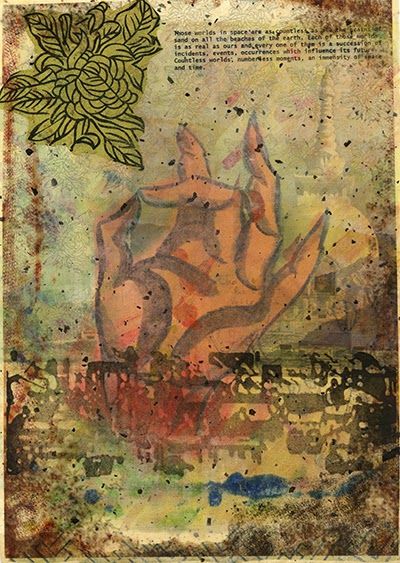 At this month's February program, our guest speaker will be Ren Adams. Renee will be giving a brief overview of printmaking.

Printmaking. What is printmaking? For those artists who use printmaking as their medium, they are often encountered with confounded looks from people when answering the question as to what medium they work in.

Printmaking is one of the oldest art forms in the world and it is a versatile medium with a wide variety of techniques that are used to create the matrix from which prints are made. These techniques include woodcuts, linocut, etching, intaglio, serigraph, and lithography.

The matrix used for printmaking is classically a block of material such as wood, rubber, or metal. In relief printing, the matrix is carved away to create a raised image, which prints in reverse. Intaglio printing involves incision of the matrix (which is how our currency is made-by plates that are etched), while planographic techniques like lithography use specially treated limestone or flat plates, with the ink adhering in some areas and not in others. The use of stencils and screen-printing tools is also a form of printmaking.

Renee will also demonstrate a watercolor monotype (without the use of a press). The painterly approach to monotypes can range from loose and spontaneous to structured and carefully planned ... and everything in between. In other words —this technique is for everyone!!

A short bio on Renee Adams: a Southern California native, Ren has been working in the visual arts for more than 20 years, with an emphasis on painting and printmaking, integrating traditional Chinese ink techniques with contemporary digital and mixed media concerns. She has a BFA in Studio Art (printmaking) from the University of New Mexico and is an MFA in Visual Arts candidate at the Art Institute of Boston. Ren has participated in a number of regional and national exhibitions and has also published poetry and illustrations. Ren’s primary body of work is concerned with the emergence of being from non-being, and its relationship to Eastern philosophy, physics, information systems and social networking. Ren currently teaches arts and humanities courses through the University of New Mexico.
Posted by Paula Scott Molokai Girl Studio at 2:50 PM No comments:

Kicking Off 2014 With An Art Critique!

Many of you have requested to bring in someone from the outside to critique our work-we've heard your request and have responded! For our art critique format this month you are asked to bring in a piece of art that you are NOT satisfied with, feels unresolved or not quite completed for a critique. Ralph Greene, owner of the Free Style Art Gallery will critique the piece and give you an informed and very professional feedback of your work.


Ralph Greene, not only is an international artist, but has been active in the local art scene for many years now and owns the Free Style Art Gallery in downtown Albuquerque. The gallery is located at 1114 Central Ave. SW.


If you are not in the habit of having your work critiqued regularly, this is a great chance to get that done (and has always been a popular program format with RRAA membership). You must be a current member in order to have your work critiqued, so make sure that your dues are paid up for 2014!
Posted by Paula Scott Molokai Girl Studio at 10:16 PM No comments: