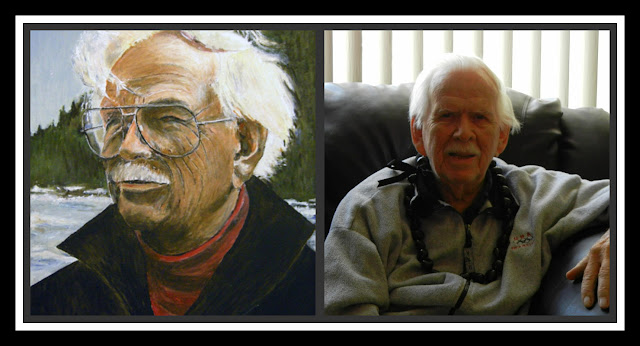 (self portrait of Russell then and Russell on July 27, 2011)
A longstanding member of RRAA, Russell Sabin is moving to San Diego. He leaves on Sunday, July 31. There is still time to go see him and say goodbye! He is moving to San Diego (Carlsbad) to an assisted living facility that is just one mile from one of his sons. I think Russell is looking forward to the change, the move and to be in a different climate. Carlsbad is a beautiful area and it is right on the coast, so Russell will be able to enjoy the beach.

Macular degeneration has caught up to him, so he had to stop painting about a year ago-I know he misses doing that as he used to paint one painting a week. He is in good health and and spirits and he will miss his comrades at RRAA.

Right now, Russell is in an assisted living facility right across from Intel on Sara Road. He can have visitors anytime. You do not need to make any arrangements...just show up. The address is 1504 37th Street SE and the phone number is 994-0350. The name of the facility is Genney's Senior Care, but the name is not on the house anywhere. To get there, go west on Sara rd. off of 528 for two blocks. At the Catholic church, turn left on 37th street. The house is the second one on the left.

I hope some of you find the time to stop by and say goodbye to Russell. He will be thrilled to see you and let me tell you, there will be no lack of conversation! He is still as sharp as a tack!
Posted by Paula Scott Molokai Girl Studio at 7:56 AM