The New Mexico Natural History Museum had a call for Naturescape Photography to be displayed May 23 through August 30, 2009. The theme was, "Being There: Photographers in Their Natural Habitat". It was a juried show and the catch was that you (the photographer) had to be in the image as "proof of your being there".

Only 30 images will be displayed in this exhibition. I put all my eggs in one basket and submitted one image I took back in March at a Wilderness area near Chaco Canyon called, Ah-Shi-Sle-Pah. 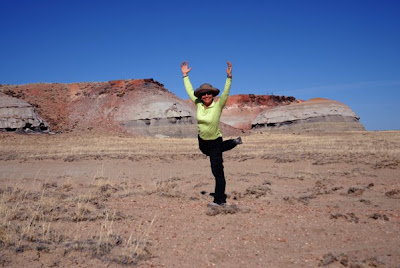 No Photoshop magic was used for this image. It was quite a comical scene to be running back and forth from my camera on the tripod, trying to figure out where I will be in the picture plane all while striking a pose. The timer on my camera is only 12 seconds, so that's how much time I had to "run and pose"! It's a good thing the shot was done in the middle of nowhere!

I'm happy to announce that my image made it into the show and won one of three honorable mentions! What a thrill!

CONGRATULATIONS, PAULA!!!!!!! That is so cool!!
I love the pose. Just wish I could have been hiding behind a sage bush so I could have seen you running back and forth!!
What a great honor! Way to go, girl!!
Nina